Skip to content
Home » Birthstones » Emerald – the Birthstone for May

Emerald gemstone and the birthstone for May are symbolic with rebirth and immortality. They are also believed to bring the owner foresight, good fortune and youth, this is also alluded to in the birthstone poem for May..

Birthstone poem printables from LululilyJewelry can be found here, ready to print and frame to make a unique gift. Lululily has also just opened a printables store on Etsy and has a larger selection including party signage, children’s prints and more which can be found here

Cleopatra was said to adore emeralds they have been around for thousands of years. Cleopatra supposedly claimed emerald mines in Egypt during her reign.

Emeralds have also been found in burial chambers of ancient Egyptians though to have been put there as a symbol of protection.

Considered to be a symbol of loyalty and new beginning it is a meaningful gift to be treasured. Elizabeth Taylor’s famous emerald pendant sold in 2011 for $6.5 million.

The Gachala Emerald one of the largest emeralds in the world at a whopping 858 carats. It is now exhibited at the National Museum of Natural History of the Smithsonian Institution in Washington, D.C

The Chalk Emerald below is a whopping 37.82 carats and was mined in Columbia. It was once the centerpiece of an emerald and diamond necklace owned by Indian royalty. 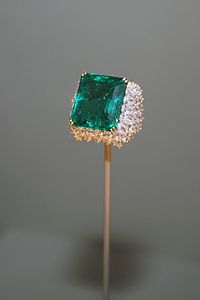 The emerald was recut in the 20th century, and set in a ring designed b Harry Winston, Inc., and surrounded by 60 pear shape diamonds.

Today the Emerald gemstone and the birthstone for May, still remain a sought after stone and a beautiful birthstone gift to be treasured.

But buyers beware, emerald is also one of the stones that almost always has been oil treated due to the stones included nature. This treatment is done to both enhance the beauty of the stone and reduce the appearance of fractures. These fillers can come out over time if the stone is exposed to high heat.

Emeralds are a fairly soft stone being only a 7.5 on the Moh’s Scale and are a variety of Beryl. The Emerald cut was originally derived for emeralds with the corners cut off to prevent breakage in the stone.

Word of caution – do not clean your emeralds with chemical cleaners, a mild soap and warm water are best then dry and polish with a soft cloth.

Please let us know if you enjoyed this article, and/or what other topics or “how to’s” would you like to see?